Pinpoint and Protect Security Gaps in Your Applications

Reduce risk and save time by:

Organizations today are challenged to not just measure their application security risk, but also fix the vulnerabilities that create that risk. Unfortunately, it’s not as simple as it sounds; many application vulnerabilities require code changes that can be costly and time consuming to implement, and entail constant back-and-forth between security and development teams to identify, validate, and fix. Sound painful? It often is.

That’s why F5 BIG-IP® Application Security Manager™ (ASM) integrates with Rapid7 AppSpider to reduce the amount of time you’re left exposed to attack while longer-term fixes are built and implemented.

AppSpider’s Defend capability enables you to close security gaps in applications while the development team works to deliver a source code patch. AppSpider will generate Web Application Firewall (WAF) rules custom to the vulnerabilities that are identified. These virtual patches are tailored to specific vulnerabilities found in a target application so that the highest level of protection can be applied by the WAF. Through the integration with F5®’s BIG-IP® Application Security Manager™ (ASM), WAF rules generated by AppSpider can be immediately imported into F5 BIG-IP ASM for remediation that takes only minutes—not the days and weeks required by a source code patch. After the custom rule is enforced by an F5 BIG-IP ASM policy, AppSpider can also test the virtual patch and confirm the security gap is closed with its interactive attack replay feature. 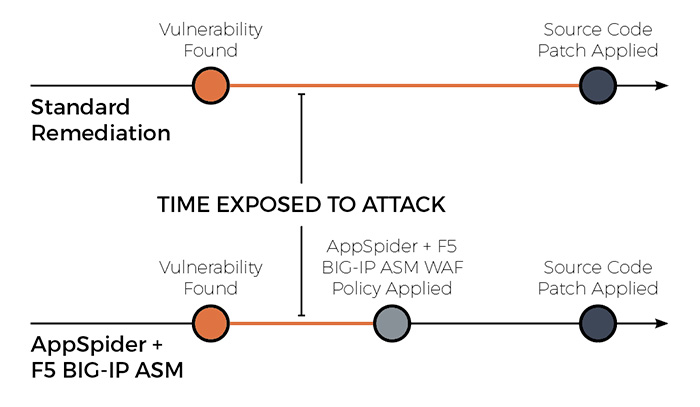 Overview of the Integration Process

Added to your cart: